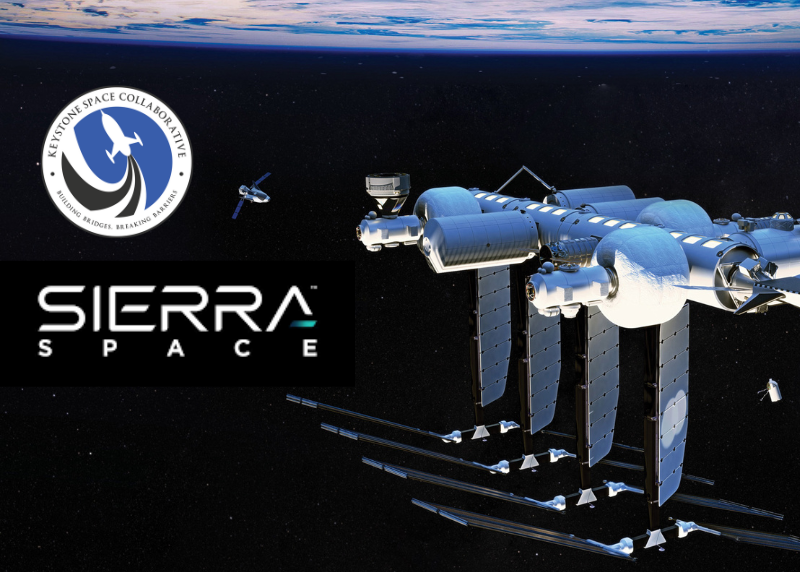 PITTSBURGH and LOUISVILLE, Colo. (November 10, 2022) – The Keystone Space Collaborative, a nonprofit organization leading the expansion of space industry business and talent in Ohio, Pennsylvania and West Virginia, and Sierra Space, a leading commercial space company at the forefront of building the future of space transportation and infrastructure for low-Earth orbit (LEO) commercialization, have signed a Memorandum of Understanding (MOU) that supports the development of Orbital Reef, the world’s first commercial space station being built by co-lead investors Sierra Space and Blue Origin.

The MOU also supports joint business opportunities between the Keystone Space Collaborative and Sierra Space, aligning with the Collaborative’s mission to advance the space economy in Ohio, Pennsylvania and West Virginia.

The partnership ultimately aims to inspire a broader interest in the commercial LEO economy and in microgravity research. The goal is to capitalize on Sierra Space’s access to platforms in space and the Keystone Space Collaborative’s growing network of customers who realize the benefit of these platforms to develop a pipeline of research and technology in commercial LEO for all types of organizations in the region. Furthermore, Sierra Space and the Keystone Space Collaborative believe their combined efforts offer great opportunities in initial research and technical payloads for use in commercial space stations such as Orbital Reef.

“There are so many companies, people and entities across our region with the skills and technology to make incredible strides in space exploration,” said Priscilla Beal, Keystone Space Collaborative founding member and Board Vice Chair. “This partnership is one exciting step the Keystone Space Collaborative plans to take to create connections, job opportunities and ways to capitalize on our region’s assets to become a leader in developing the commercial space industry.”

The intention is to operate Orbital Reef as an ongoing commercial enterprise for use by:

“Sierra Space is thrilled to partner with the Keystone Space Collaborative to grow the commercial space sector in Ohio, Pennsylvania, and West Virginia,” added Neeraj Gupta, Sierra Space Senior Vice President & General Manager, Space Destinations. “As the commercial space economy continues to rapidly expand, our efforts are aligned to further develop the capabilities of Sierra Space’s innovative technologies tied to Orbital Reef and our LIFE habitat systems for our industry partners. Sierra Space aims to be the leading service provider for the region and work with the Keystone Space Collaborative to develop a pipeline of research, manufacturing, and technology payloads on our commercial LEO platforms.”

Sierra Space designs and manufactures advanced spacecraft, spacecraft subsystems and space technologies for civil, commercial and national security applications. In collaboration with the Keystone Space Collaborative, Sierra Space will co-lead plans to develop, launch, deploy and operate space platforms, including Orbital Reef, with Sierra Space’s LIFE module as the main element for the habitable spaces and with other elements and services to be contributed by partner companies.

ABOUT THE KEYSTONE SPACE COLLABORATIVE: Founded in 2021, the Keystone Space Collaborative is the tri-state’s premier space organization committed to attracting, growing and amplifying the next generation of space industry businesses and talent in Ohio, Pennsylvania and West Virginia. By convening people passionate about space, the Collaborative aims to attract more opportunities for job creation, inclusive prosperity and growth in this fast-growing sector. To learn more, visit keystonespace.org.

ABOUT SIERRA SPACE: Sierra Space (www.sierraspace.com) is a leading commercial space company at the forefront of innovation and the commercialization of space in the Orbital Age. Sierra Space is building platforms in space to benefit life on Earth. The company is in the latter stages of doubling its headcount, with large presences in Colorado, Florida and Wisconsin. Significant investors in Sierra Space include General Atlantic, Coatue, and Moore Strategic Ventures.

With more than 30 years and 500 missions of space flight heritage, Sierra Space is enabling the future of space transportation with Dream Chaser®, the world’s only winged commercial spaceplane. Under construction at its Colorado headquarters and expected to launch in 2023 on the first of a series of NASA missions to the International Space Station, Dream Chaser® can safely carry cargo – and eventually crew – to on-orbit destinations, returning to land on compatible commercial airport runways worldwide. The company is also establishing a Human Spaceflight Center and Astronaut Training Academy. Sierra Space is also building an array of in-space destinations for low-Earth orbit (LEO) commercialization including the LIFE™ (Large Integrated Flexible Environment) habitat at the Kennedy Space Center in Florida, a three-story commercial habitation and science platform designed for LEO. Both Dream Chaser and LIFE are central components to Orbital Reef, a mixed-use business park in LEO being developed by principal partners Sierra Space and Blue Origin, which is expected to be operational by the end of the decade.

This website uses cookies to improve your experience while you navigate through the website. Out of these, the cookies that are categorized as necessary are stored on your browser as they are essential for the working of basic functionalities of the website. We also use third-party cookies that help us analyze and understand how you use this website. These cookies will be stored in your browser only with your consent. You also have the option to opt-out of these cookies. But opting out of some of these cookies may affect your browsing experience.
Necessary Always Enabled
Necessary cookies are absolutely essential for the website to function properly. These cookies ensure basic functionalities and security features of the website, anonymously.
Functional
Functional cookies help to perform certain functionalities like sharing the content of the website on social media platforms, collect feedbacks, and other third-party features.
Performance
Performance cookies are used to understand and analyze the key performance indexes of the website which helps in delivering a better user experience for the visitors.
Analytics
Analytical cookies are used to understand how visitors interact with the website. These cookies help provide information on metrics the number of visitors, bounce rate, traffic source, etc.
Advertisement
Advertisement cookies are used to provide visitors with relevant ads and marketing campaigns. These cookies track visitors across websites and collect information to provide customized ads.
Others
Other uncategorized cookies are those that are being analyzed and have not been classified into a category as yet.
SAVE & ACCEPT